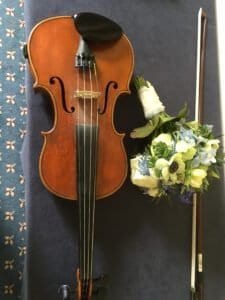 It is tipped to sell for the biggest price at auction in Sotheby’s Australia.

Russell Crowe is selling his personal collection of movie-related memorabilia as part of a ‘divorce auction‘ in Sydney, and among a pile of items from films like Gladiator and Romper Stomper is this Milan violin by Leandro Bisiach, made in the late 19th century.

While filming the movie Master and Commander, Russell Crowe was given a heavy-set German violin which, he felt, was not of good enough quality to be owned by his character, Jack Aubrey.

Crowe recounts: “It was my thought that the Captain, as gruff as he may be, would play a finer instrument. Peter Weir, (the director), agreed with me, but the film’s budget couldn’t take the extra cost. So I had my friend, Richard Tognetti, (from the Australian Chamber Orchestra), and my violin teacher, Robert Greene, try to track down something more suitable. They found me this beautiful Leandro Bisiach (made in Milan in 1890). Though it was a later piece than the time period of the film, the fact that it was in the style of Guarneri meant that it was a shape and style that Aubrey would have purchased. This is a serious concert level violin with a beautiful tone. It comes with a faux-Baroque bow, which was also used in the film.”

You can watch the bidding for this beautiful violin, and lots of other items, on Facebook.

This site uses Akismet to reduce spam. Learn how your comment data is processed.